Do You Know What Lucky Last Means? 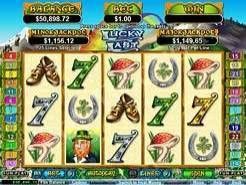 Play Now
This does seem a strange title, but it is attached to a game from RTG that delivers a truly Irish luck-themed slot, which does make sense of it. With all kinds of lucky symbols on the reels, you never know if one or more of them could be lucky in some way for you. The reels are quite detailed and the background of course features the lucky rainbow. Would that rainbow have a pot of gold at the end of it for you?

This is yet another five-reel, 25-line slot from the team at RTG.

You’ll be familiar with the one cent to $5 range of coins often used for RTG games, and that is exactly what you will get here.

Does Lucky Last have any special symbols?

A lucky coin is featured in this game as the wild, and there are two versions of it. One says Lucky and the other says Last. They appear on reels one and five respectively. The lucky shamrock appears as the scatter. This is the only symbol that cannot be replaced by a coin.

You can try to get seven free games (seven is a lucky number) if you find both the coins on reels one and five at the same time. While you can retrigger the free games, you can only do it on the final free spin of the block of seven. However, you do have a 50/50 chance of doing it! Furthermore, the first six spins have tripled prizes, while the final spin has double-value prizes. If you do retrigger the feature, it is possible to retrigger it again up to as many as five times.

This game is not the only one to have luck associated with it, but it does provide you with a nice theme that could prove fortunate for you in some way. This would be the case for sure if you managed to get a progressive jackpot. We say ‘a’ and not ‘the’ because there are two in play – the minor jackpot and the major jackpot. These can be triggered at any time so you never know if one of them could be triggered while you are playing the game. Try your luck while playing Lucky Last today !
Join and Play
Play Now