Time to Meet Those Pesky Hillbillies! 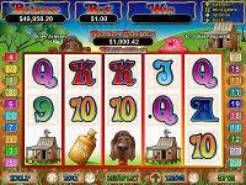 Play Now
Now here’s a great game from the RTG stable. Get ready to meet the Hillbillies populating this slot, along with their great little home and the moonshine it looks as though they make there. With all kinds of treats to look forward to, not to mention a random jackpot ticking up in value as you play, there’s every reason to have a go at this here game !

It’s easy to sort out the paylines, because 20 of them are labeled at the sides of the screen. You have five reels in action as well.

Yes, it can be played like this if you prefer. However, you also have a few other coin values to check out, and these could go up to $5 a time on each line.

Does Hillbillies have any special symbols?

The Hillbillies are the wilds in the game, and there are three of them. They can show up on the three odd-numbered reels. The first and third reels can multiply by 2x if you get one in a prize, whereas the Hillbilly on the fifth reel will add a 5x multiplier. There are three scatters too, and these are the same Hillbillies. This is a little odd, but you’ll get used to it. Two or more pay a scatter prize. Two or more will also trigger eight free games. This is excellent as you normally need a minimum of three. Everything you win is doubled in value and you also have a chance to retrigger another set of spins.

No, but there is a Hillbilly bonus feature that can be triggered while you are playing the free spins round. This means you get a multiplier if one of the Hillbillies appears on their respective reels.

Hillbillies is a great game and is lots of fun to play. You’ll see some classic symbols on the reels as you play, but do look out for their dog, not to mention a piggy in a bath, for some mad reason! Whatever you think of cartoon-style slot games, we think it’s hard not to like this one. The country theme and feel make it irresistible, as do those Hillbillies on the reels. Check it out now and let’s see whether it pays out to you when you play.
Join and Play
Play Now