Will the King of Swing Bring You Luck on the Reels? 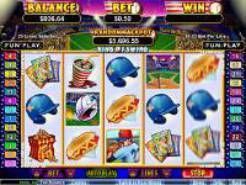 Play Now
If you’re ready for some cool jazz, think again. The King of Swing here refers to the best baseball players the game has to offer. Yes, this is a sports-themed game related to baseball, which should give you some idea of the symbols in store for you. The enticing game screen makes everything nice and sharp and clear, and you can expect baseball helmets, hot dogs and plenty more symbols to appear and possibly pay out to you as well.

The highest payline here is numbered 25, which is set to the side of the five reels in play.

It could be, if you want your budget to go as far as possible. However, if you want to place bigger bets, you can try placing them up to the value of $5 each time.

Does King of Swing have any special symbols?

You do of course have a wild and a scatter, and here they are represented by a pitcher and a ball respectively. The ball has an alarmed face on it – it’s obviously not looking forward to being struck! But the pitcher is not the only wild in play. You have a second one here too, and this is a batter. The pitcher could show up on the first four reels, and the batter will only ever show up on the fifth one. The pitcher doesn’t add a multiplier to wild-won prizes, but get a batter as part of a winning combo and it will triple the prize won.

Get a pitcher on the first reel and a batter on the fifth reel and you will try to win some free games. The batter faces the pitcher on the baseball diamond, and he will try and hit as many balls as he can. If he hits one, the free games you get relate to where he hits it. Base one, two or three rewards with one, two or three games. A home run delivers four games. It also increases the multiplier applied to the free games by 1x each time. You get a maximum of nine successful pitches… but strike three and you’re out! The minimum multiplier is 2x.

Well, this game certainly does offer a lot. Step up to the plate and try it for size today !
Join and Play
Play Now