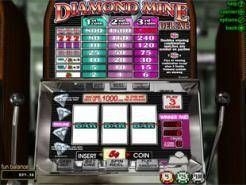 Play Now
Diamond Mine Deluxe Slots is a sequel to a game that likely did not need it, but does manage to beat it at pretty much everything it does. This is not particularly hard given the limited nature of the first game, but it is a welcome improvement to the original, so our hats are off to the developers for giving it another go. Featuring classic gameplay mechanics and a fittingly retry presentation, this is a slot for people that miss simpler times with simpler things and simpler folks. If you liked faced paced games that do not pretend to be something they are not, Diamond Mine Deluxe Slots was made with you in mind. It also goes without saying that if you are a fan of the original, you will love what is on offer here. Accordingly, if you were not, then this game likely will not float your boat any more than their prior efforts.

Much like the original, Diamond Mine Deluxe Slots is a classic slot game that tries to make believe you are at one of the original Vegas casinos sitting down to sip some gin before your flight will you make spin after drunken spin. There is nothing about this game that claims to be otherwise, which works both for and against its appeal. We do enjoy the boldness of this version in sticking to that theme and hitting it home, but for many, this may be a detriment, as the original was not exactly a compelling game to look at or play.

Diamond Mine Deluxe Slots looks better than the original in virtually every way. Although the 3d model of the slot machine looks largely the same, pretty much all the symbols have been slightly updated to look a little fresher and more enticing. Everything is just a bit crisper, clearer, and more vivid than the original, though that is not saying all that much given how bar bones both technically are. It is not an ugly game by any means, but it looks like a low budget thing you might find in a 90s era video game that was inserted as an afterthought.

This is where Diamond Mine Deluxe differs the most from its predecessor, and for good reason. In the original, there was not much going on while you played. You spun and spun, and sometimes you won. Granted, all slots are like that, but they usually have a little something added to make them unique or interesting, which the original neglected. Here, however, they introduced a progressive jackpot, which instantly makes this game 1000x better than the version we felt like we were playing only moments ago. As you might expect, you hit all the diamond symbols to activate this, just like the original. The main difference here is that it is more interesting, which we thank them for. Betting is equally as accessible as the original, ranging from five cents to five dollars, with the same low number of reels coming in at three.

Diamond Mine Deluxe Slots improves upon the original in all ways and for all people, which we are thankful for. That said, this is still a very standard slot that tries to harken back to an era that we have all largely moved on from for good reason. The addition of the progressive jackpot makes this a choice version for that reason alone. If you are at all interested in classic themes, or a bit of a hipster, give this slot a try. You will not be disappointed, neither in how it plays, or the money you will win.
Play Now